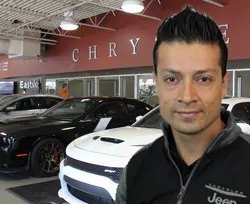 Ricardo grew up in Colombia and moved to Canada at age 20. Initially the move was going to be temporary (as he was attending school as an international student) but then met the woman who would later become his future wife and decided to stay. He was introduced to the car business by one of his friends (finance manager Danny Jenkins). Just like coming to Canada, he thought Eastside was going to be a temporary thing but fell in love once again and decided to make the business his life! Coming from Colombia Ricardo is fluent in Spanish, loves soccer (watching and playing), practices yoga and works out regularly. He does his best to live a healthy lifestyle mostly so that he can keep up with his toddler son Gabriel. He is also trying to learn how to play hockey which has been has slow and sometimes painful process but all in all is a lot of fun. If Ricardo is not at work finding the right vehicle for the right price for his customers, he's most likely spending time with his wife Geneve and his son Gabriel.