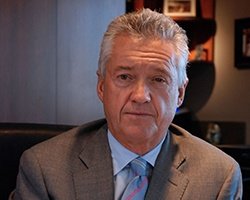 Jim was born and raised on a farm, just west of Brandon, Manitoba.  Jim and his five brothers and sisters had a wonderful upbringing with mom, dad, grandma and many aunts, uncles and cousins.

After graduating from high school Jim started selling cars at the age of 19.  He loved the business but had a desire to become a lawyer so through a combination of part-time university courses, summer courses and eventually full time Jim received his B.A. from Brandon University in 1975 and graduated from Law School at the University of Manitoba in 1978.

Jim practiced law in Brandon for only two years and although was proud of what he had done, he didn’t love the law, what he loved was the car business and a big part of his attraction was the opportunity to work with people and build teams.  Jim always recalls that growing up on the farm everyone worked together, worked hard, got things done and had fun doing it.  That is what he wanted.

After deciding that he still had some gasoline in his blood Jim moved to Calgary in 1980 to accept a job at Southgate Chevrolet.  He worked there as Sales Manager and de facto General Manager until 1987 when he purchased Eastside Dodge.  Although Jim had other offers he decided that he only wanted to have two bosses in the car business, the first one was the dealer at Southgate and the second one was going to be him.

Jim got the opportunity and purchase his first dealership in 1987 and since then has grown the group into one of the largest automotive groups in Canada. Jim has five children and is a proud grandpa seven times over.