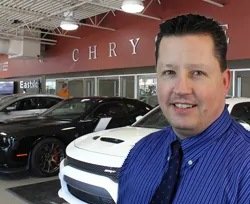 Originally from a small town in Alberta, Derek began his sales experience working for a local electronics store. He soon realized his knack for sales and desired to branch out in search of something new. Derek moved to Calgary and worked for 9 years at Visions Electronics. He eventually made it to Eastside Dodge where he began as a sales consultant- selling cars for his first 3 years. Derek was later given the opportunity to move into the finance department where for the last 5.5 years has happily been a finance manager.