The SUV market continues to be one of the most competitive in the automotive industry. Compact Crossover SUV's have risen in popularity for years now, and even inside that market segment, there is a ton of variety. The 2016 Jeep Patriot exists in a somewhat unique space in that it is smaller than a model such as the RAV4 but is still larger than something like a CR-V. In addition, the Patriot holds to a more traditional SUV look with its boxy exterior design combined with traditional Jeep flavors such as the front grille and tall roofline. 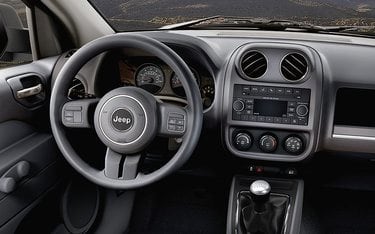 As mentioned, the 2016 Jeep Patriot holds to a more rigid and structured look compared to many newer SUV's that chose to focus on curved edges and softer lines. The detailing work that is done on the outside is simple but efficient and other key features add to the traditional Jeep "masculine" look. One of the biggest benefits of the more squared off or boxy shape is how well it lends itself to interior space. The 2016 Patriot has a ton of useful space in both the seating and cargo areas. The rear seats fold down easily and there is a great amount of headroom in both front and rear seats. Jeep has made strides to update the interior look of the Patriot with various metallic and wood accents, along with other technology upgrades.

The base 2016 Patriot model comes with 2.0L 4 cylinder engine that outputs 158 horsepower. However, the all-wheel or higher trim models come with 2.4L engine that pushes out 172 horse. You can pair that engine with either a 5 speed manual transmission or a 6 speed automatic. The addition of a CVT also allows the 2016 Patriot to hold its own in a variety of off-roading conditions along with keeping up with city driving. The transmission combined with the size and design of the 2016 Patriot allow for comfortable maneuverability in a more urban driving environment.

Starting at an MSRP of $19,345 and featuring best-in-class towing capability, the 2016 Jeep Patriot is a popular choice for those looking for a capable adventurous vehicle at a price tag that's hard to argue. Visit Eastside Dodge today at 815 36 St NE Calgary, AB, and our staff will be happy to address any of your questions or concerns regarding the 2016 Jeep Patriot